My first turntable was a belt driven Philips AF-222 that I bought from my brother. I was realy proud of the machine and have been using it all my youth.

My brother bought a Technics turntable that I also liked very much. It was a direct drive SL-1900.

After I parted with my Philips turntable I bought the SL-1900 and was very happy with it. I still think it is one of the nicest looking turntables.

I was missing something though, so I went and bought a Technics SL-1600 MK2. It was a Quartz driven deck. It should have been almost perfect but I found the sound to be quite boring.

So started my quest into Lenco land.

I have become very interested in Lenco after reading a lot of articles on internet about its reputation. The Lenco turntables from the 70’s are very  strong machine. They are made to last and it shows.

If you want to learn about Lenco visit http://www.lencoheaven.net.  This forum has such friendly members, it has been my main source of information for my project. 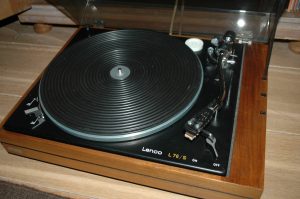 My first Lenco was an L76/S. The 76/S has an S shaped tonearm. This arm is from Jelco and is 210mm like all other Lenco arms as it was made specialy for Lenco. The antiscate is on a lever to the right of the arm at the bottom.

Like all other Lenco’s from the same era the L76/S is an idler wheel turntable. The motor has a conic axis. The speed of the platter is controled by moving the idler wheel along the axis.

The lenco turntables like the L76/S can outperform many of the modern day turntables.

This turntable has been in use while I worked on my next turntable. 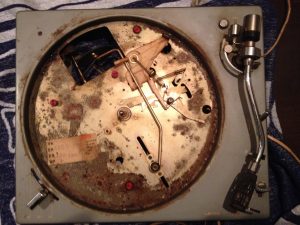 I think my Lenco L78/SE must have had a real hard live. There was a lot of dirt below the turntable and also nicotine stains on the tonearm and other parts. I took the deck apart and started cleaning it. Results started to look 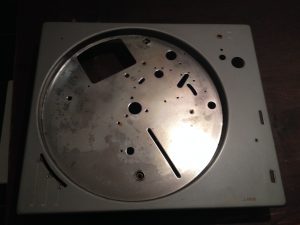 Next step was to build a plywood plinth for it consisting of multiple layers of plywood. The problem was that there was no drawing available for this model of Lenco. I started basically with some carton parts from a cereal box to try to get the form right but this was not rigid enough to serve as a template. That is why I started using a piece of plywood and a router to get it setup. 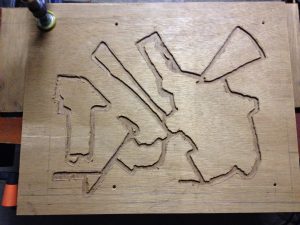 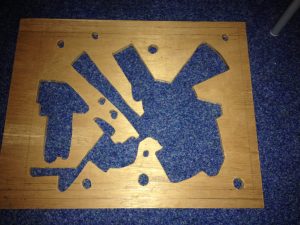 Here I also made a mistake by starting at the hard end of the plinth i.e. the top. There were too many shapes to get in the right position to get it right.

Then one day I was driving my car and had an eureka moment. I had to start from the bottom upwards. This way the first layer I created had the smallest holes and thus least room for deviations. The next layer on top of that had slightly bigger holes and so on and so on. 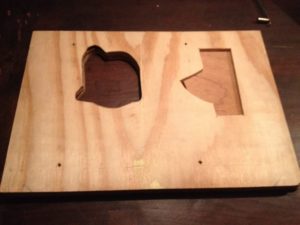 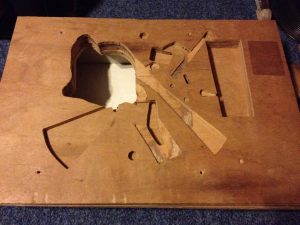 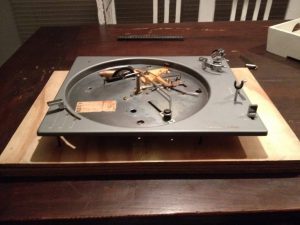 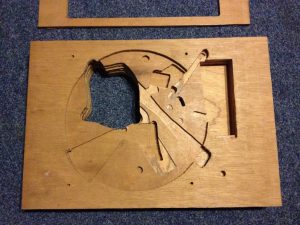 After going upward for nine layers the basic plinth was finished and it looks like I am getting somewhere. The hard part of the L78/SE as compared to for instance the L75 is that the L78/SE has a mechanism for automatically switching of the platter when the needle reaches the end of the record. This means that in the plinth there has to be room for this mechanism to move around.

But I did not want to take away too much material as I wanted the plinth to be as massive as possible to get a good solid and heavy base. I used some ingeneous method to get the plinth up to the measures I wanted. The finish of it is done using a mix of BeeWax and Carnauba wax. 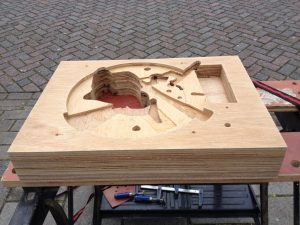 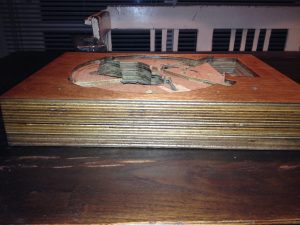 Then I decided to have a double platter and for that the arm and armrest needed to be elevated. For these tasks my father could help me with his lathe.

Next also the bearing suspension was up for an upgrade.

Now it was time to put everything together

And take it for a spin

Needless to say I am really proud of the result!

Also take a look at Lencoheaven for a complete history of the project.